Whether you are a local, a traveller or someone who just wants to know more about Mackay, the following list of blogs are sure to provide you with some enlightening facts about the sugar city.

From the best places to explore, hidden gems, Instagram-worthy cafes and tips from locals, these blogs are a lighthearted way for you to discover Mackay.

Getting Hooked in Mackay

Are we there yet? Are we there yet? So, for once it’s not the kids in the back seat. This time it’s your partner’s inner child coming out in anticipation of tangling with a chrome-sided, bucket-mouthed, leaping Barramundi whilst fishing in Mackay.

Honestly, who could blame them, the fishing here is amazing. Oh, and while you are here, you may as well tick Fingermark, Mangrove Jack, Threadfin Salmon, Queenfish, Sooty Grunter, Saratoga, Coral Trout and Spanish Mackerel off your bucket list as well. You see if it has fins, swims and is an iconic Australian sports-fish highly prized by many, you will find it here in Mackay. It’s not hard to see why really, considering the diversity of aesthetically pleasing landscapes and abundance of species present in this fishing mecca.

Whether you are an experienced or inexperienced angler, whether you are young or young at heart, the options are literally endless and are only bounded by your sense of adventure. Heck, you don’t even need a boat to get amongst the trophy fish here. Fishing off the numerous rock walls, estuarine banks or dedicated fishing platform/pontoons puts you right in the game. 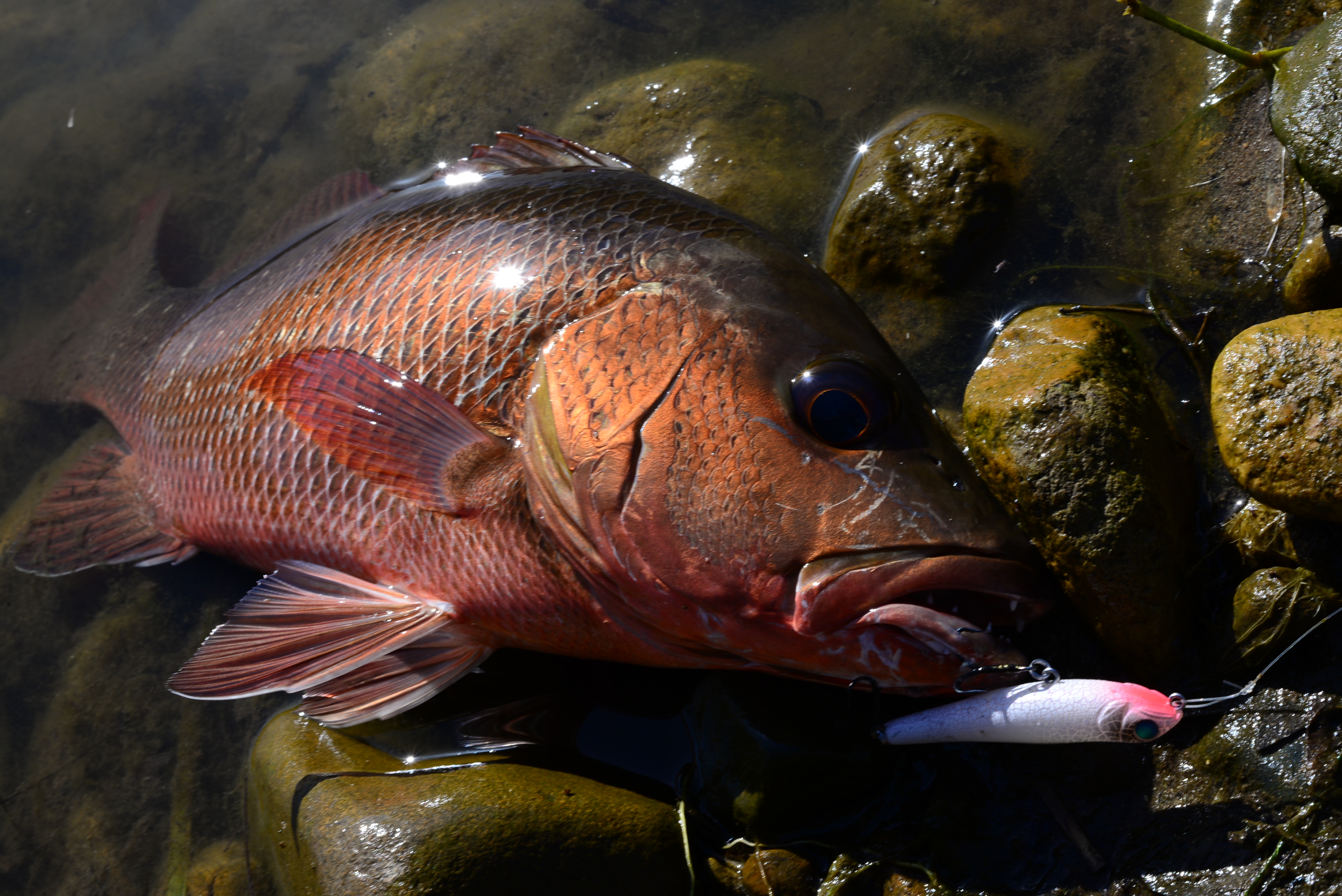 The Jewel in the Crown

What are you waiting for! There has literally never been a better time to fish the rivers and creeks in The Mackay Region. This can largely be attributed to the St Helens to Cape Hillsborough Net Free Zone which was implemented on 1 November, 2015. The Net Free Zone is an area closed to commercial gill-netting, allowing recreational fishing to flourish due to increased fish stocks/diversity, therefore creating a tourism hot spot and stimulating the local economy. Is it working I hear you ask? Too right it is, and then some! Ladies and gentlemen, this is nothing but good news for the travelling fisho and their families. You can opt to stay a couple of minutes away and camp out at Seaforth Reserve located right on the beach front or if glamping is your thing, stay some 15 minutes down the road at Cape Hillsborough Nature Tourist Park who offer a wide range of accommodation suitable to a vast array of budgets. Oh, if this place sounds familiar it’s because it’s internationally famous for having kangaroos and wallabies on the beach at sunrise. This is truly a spectacle to see.

If you don’t have your own boat and a charter tickles your fancy, then give Jason from Inshore Fishing Charters a call. He is a Mackay local who has fished these waters his entire life, and geez, talk out about knowing his stuff. Spend a mere five minutes talking to this guy and you will see the passion oozing from his pores. This is a good thing, trust me. He caters specifically to the wants and needs of each client. Whether it be Whiting or Barramundi, bait or lure, Jason will have you hooked up in no time. 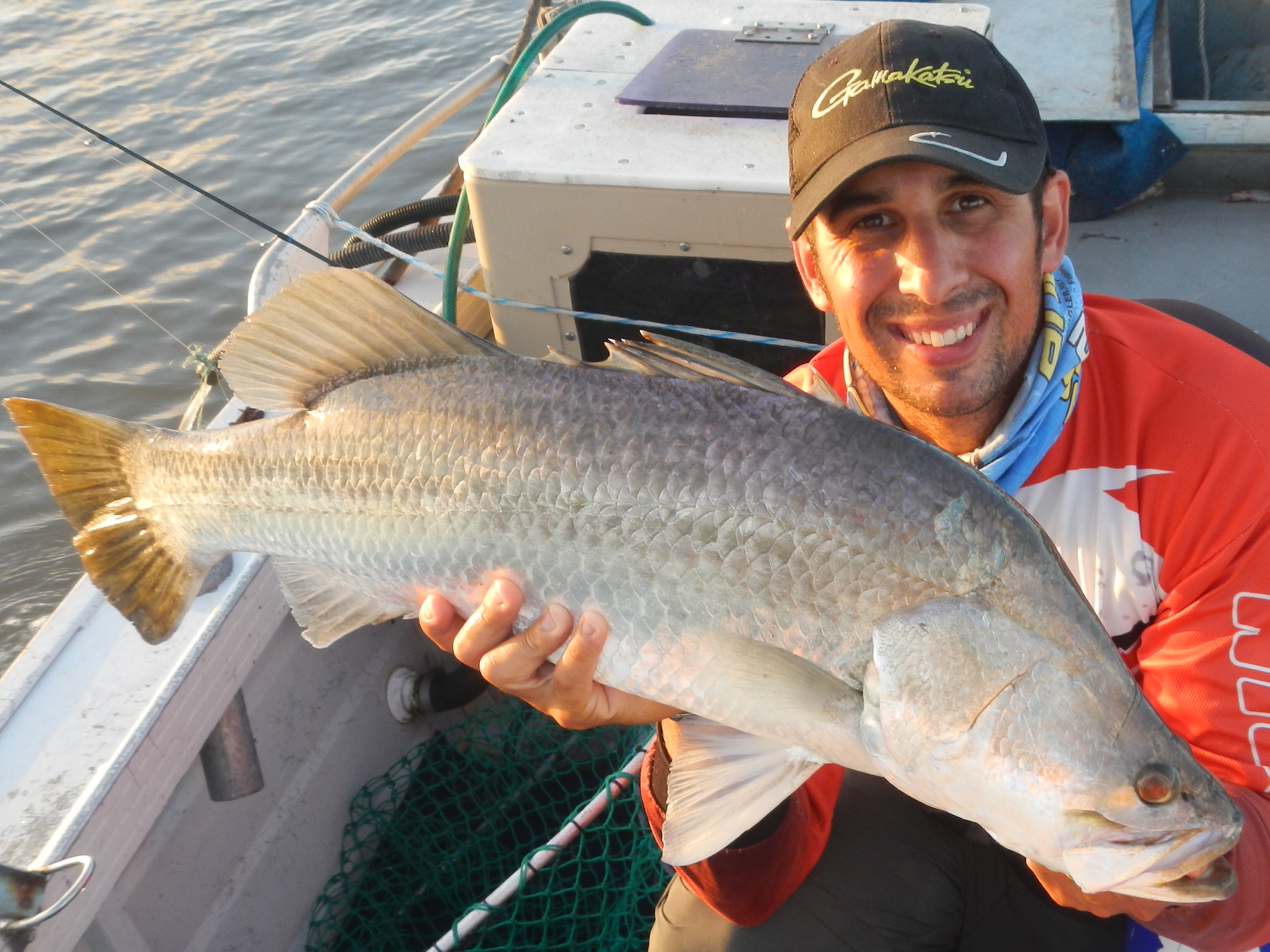 Barramundi are one of the key target species within the St Helens to Cape Hillsborough Net Free Zone. Photo credit: Luke Galea

The picturesque Pioneer Valley, located to the west of Mackay, is not only fruitful from a sugar cane production perspective but it boasts world class Barramundi and Sooty Grunter fisheries. Thoughts of Kinchant Dam and Teemburra Dam will keep you awake at night long after your head has hit the pillow. Reason being, the barramundi get so big in here that you could chuck a saddle on their backs and ride them. A metre plus Barramundi is the holy grail and fish of this size and bigger are a frequent occurrence in these impoundments. You will need to purchase a Stocked Impoundment Permit (SIP) if you intend fishing these dams. The costs are minimal and will cover you to fish any of the 63 stocked impoundments in Queensland. Further information can be found here: https://www.qld.gov.au/recreation/activities/boating-fishing/rec-fishing/dams

Whilst Kinchant is located a mere 40 minutes from the Mackay City Centre and Teemburra Dam approximately 60 minutes from the Mackay City Centre, Eungella Dam is 100% worth the extra drive. Located approximately 90 minutes from town, the Sooty Grunter fishing here is truly something special. To be honest, a fish here is just a bonus as you would be hard pressed finding a more beautiful impoundment to fish. Sooty Grunter put up an excellent fight and catching them on small surface lures during the low light hours has got to be the most popular approach. Located just a short drive from Eungella Dam is the Broken River Mountain Resort and is without doubt the first choice dining and accommodation option for travellers venturing up this way.

The recently constructed Platypus Beach in Mirani is well worth a visit on your way to or back from these impoundments. It is located directly beneath the main bridge crossing the Pioneer River in Mirani. You will know you are in the right place by seeing the dozens of tourists and locals swimming, kayaking, picnicking, fishing and generally having a wonderful time down at this inland beach. 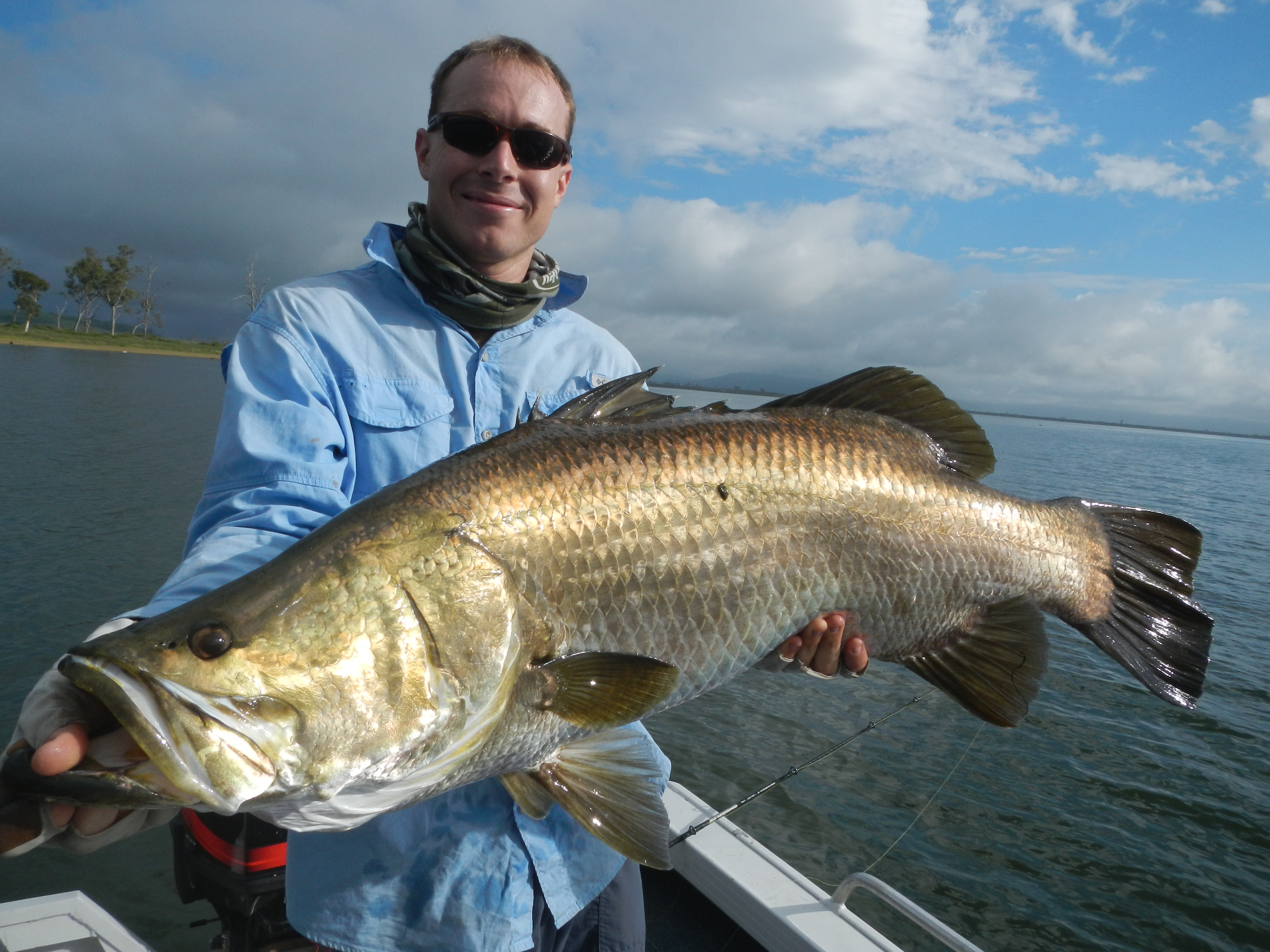 This is what a metre plus Kinchant Dam Barramundi looks like. Photo Credit: Luke Galea

Charter boat, what charter boat? For the serious angler looking to really get their arms stretched, there is a suite of offshore charter companies specialising in day trips, multi day trips and long range trips. Action Charters, Megaforce Charters and Elizabeth E II are such examples and if one word was used to describe Mackay’s offshore scene, it would have to be – unbelievable! I would be here all day if I had to list the prominent species targeted on these trips, but let’s just say that the majority of them taste as good as they fight. 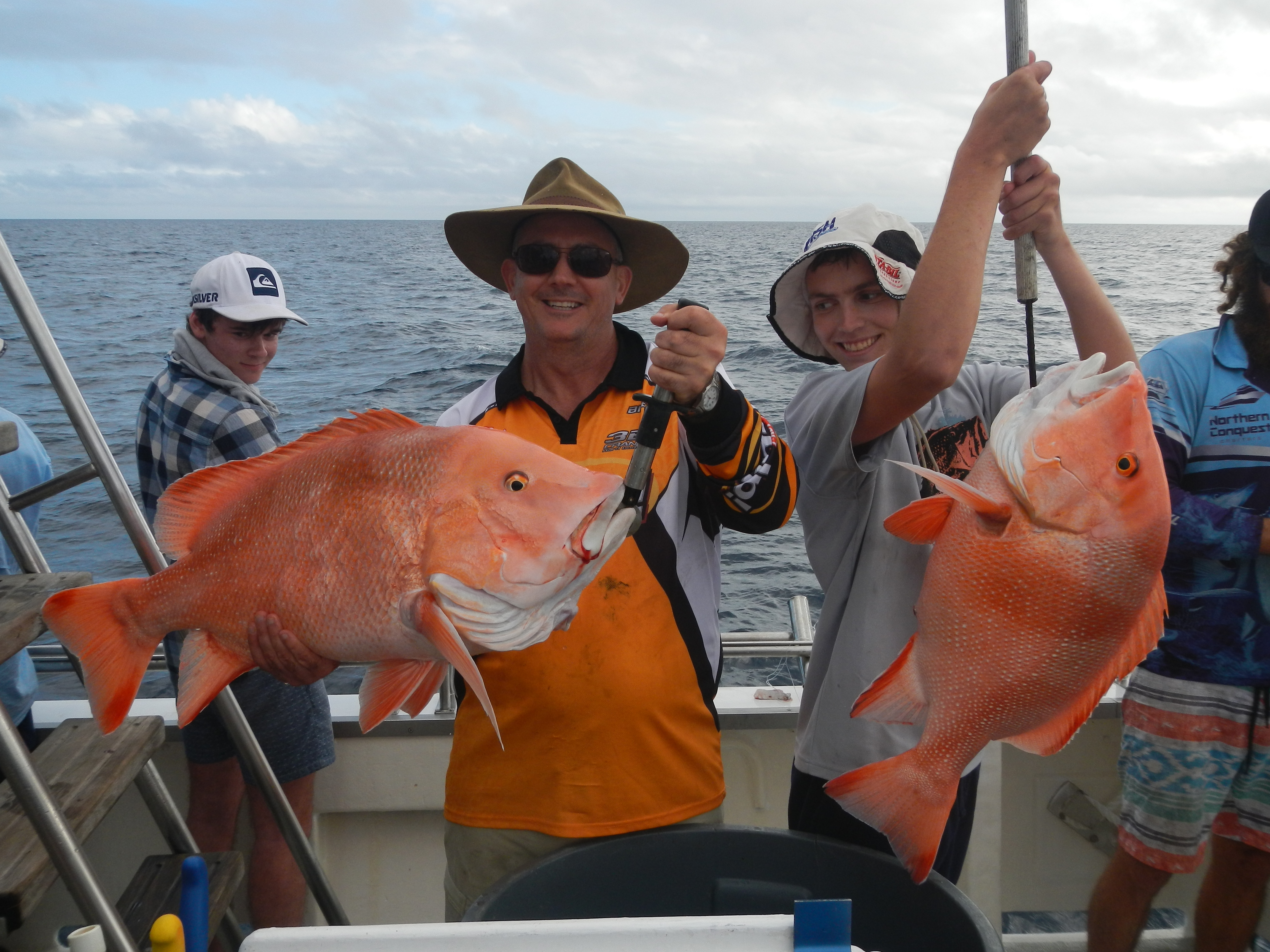 Father and son duo hook up on quality Red Emperor while on a Mackay offshore charter. Photo credit: Luke Galea

No boat? No worries mate. The Pioneer River runs through the heart of Mackay and just so happens to be one of the only true “blue water” rivers on the east coast of Australia. Land based locations here are prevalent. Simply fish the beaches close to the City Centre to encounter a plethora of bread and butter species like Bream, Whiting and Flathead. They just so happen to be some of the tastiest as well. Designated fishing platforms are also found here behind Bluewater Quay.

If you are chasing land-based Barramundi or Queenfish, the rock bar situated next to the Ron Camm bridge often yields some incredible catches, as does East Point which is at the mouth of the Pioneer River. Note: you will need a 4WD vehicle to get out to this location.

The marina rock wall is one of the best land-based fishing structures the region boasts. This rock wall is literally a couple of kilometres long and you can actually drive out to the end of it. Some scintillating, drag screaming, pelagic action can be experienced here. Mackerel (all species), Tuna and Queenfish can be targeted by casting small chrome lures and winding them back at speed. Calamari entrée’ anyone? The inside of the marina rock wall is home to some whopping big squid and can provide hours of entertainment for all ages of the family. 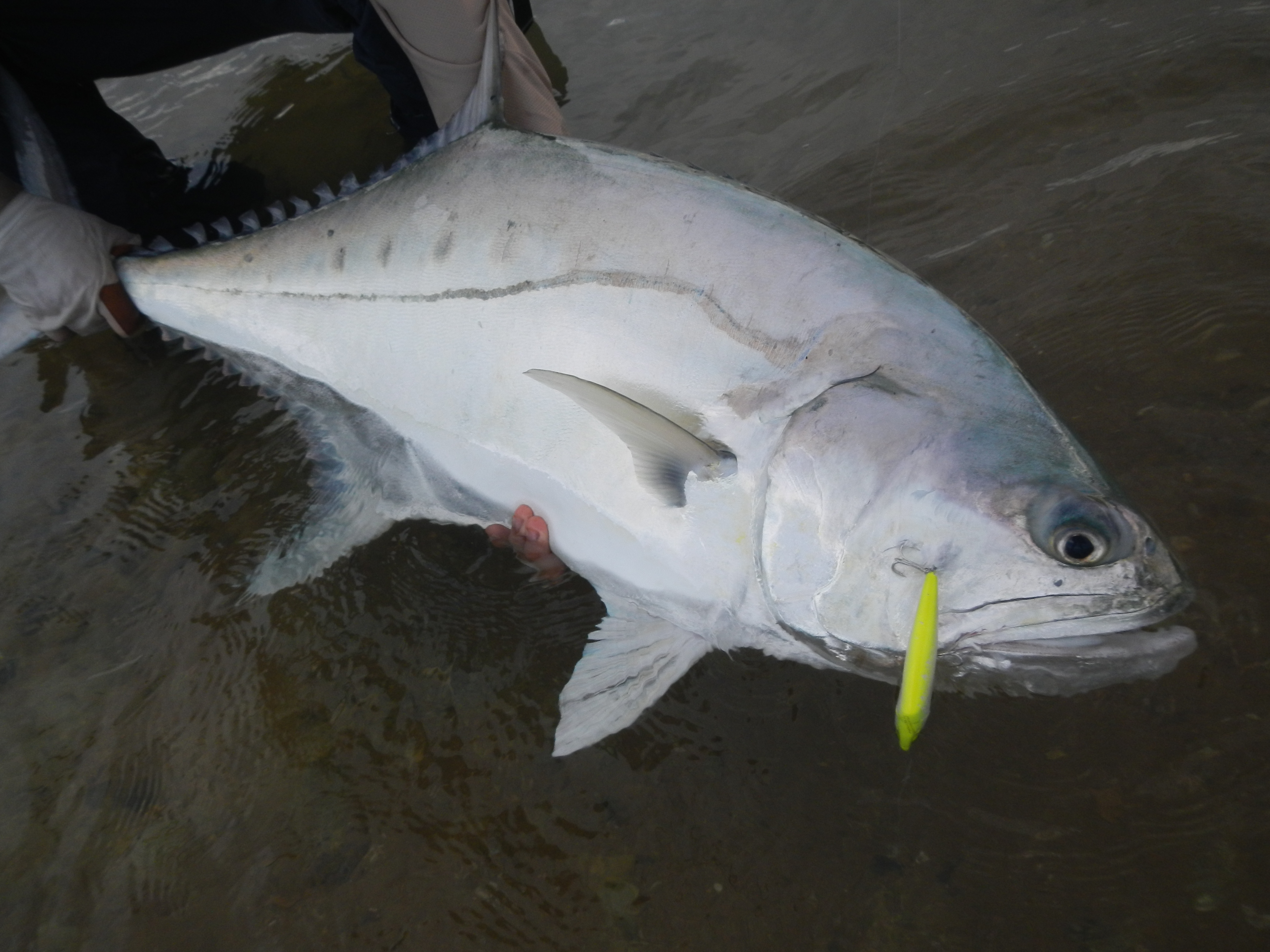 Solid Queenfish can be caught from just about any beach in The Mackay Region. Photo credit: Luke Galea

The Time is Now

Mackay fishes well all year round but really heats up between November and January. The kids will not remember a good day on the Play Station or X-Box, but a good day out fishing will remain engrained within their memory for a life-time, particularly if they happen to catch that trophy or bucket-list fish. Mackay is no longer that location you pass by in your vehicle as you travel north to fish Hinchinbrook or Cape York. It is now a highly regarded fishing destination in its own right. It is the diversity of fishing spots and locations that sets Mackay apart from anywhere else. Within 45 minutes you could be catching metre plus barramundi in one of the dams, a myriad of estuarine brawlers within the St Helens to Cape Hillsborough Net Free Zone or catching Spanish Mackerel or Coral Trout around St Bee’s and Keswick islands. Stop dreaming about it, make it happen this summer. 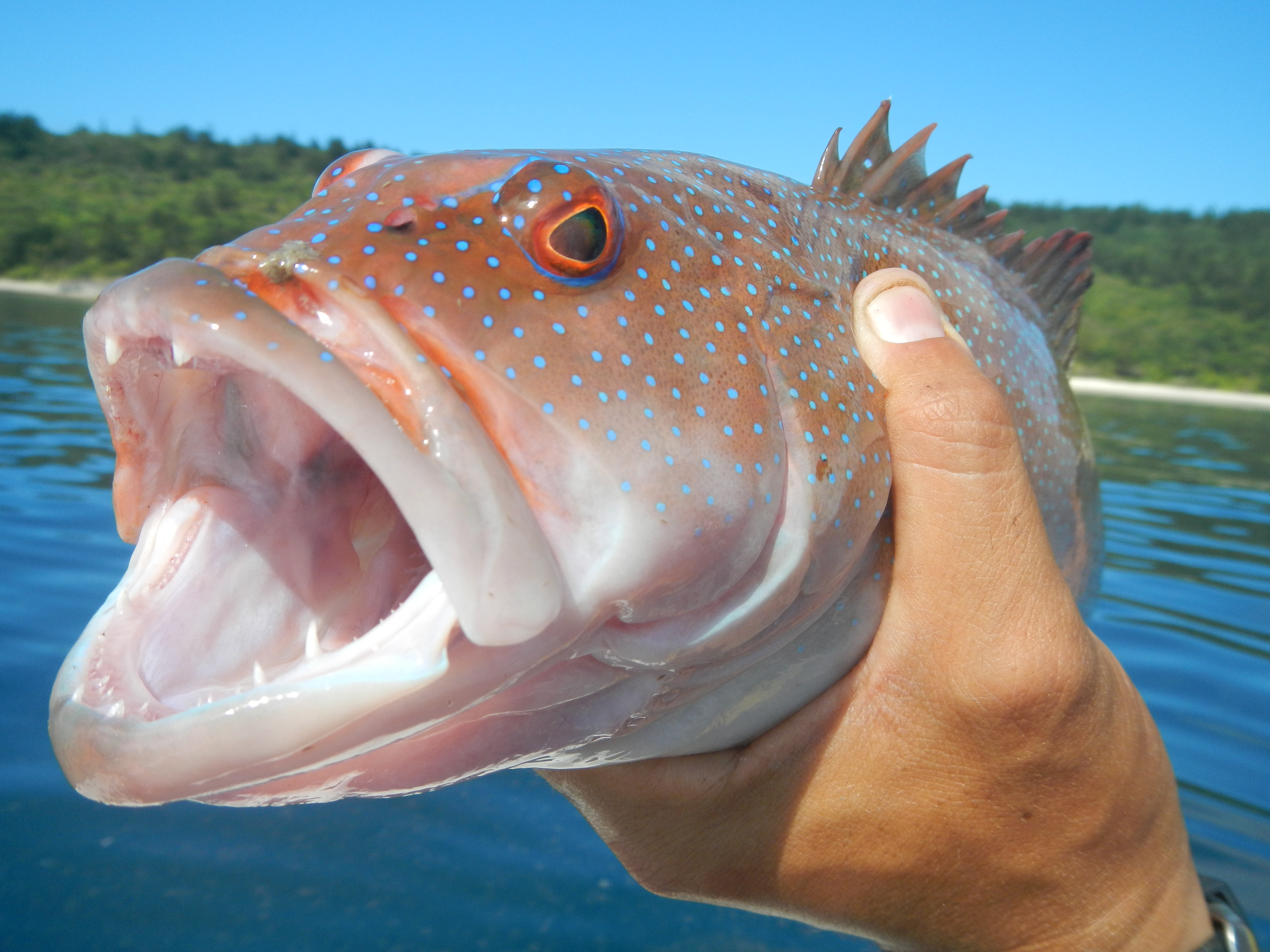 Luke Galea is a mad keen recreational angler from Mackay, who spends every spare minute wetting a line somewhere. He's been 'hooked' since the age of 4! Luke is an avid fishing writer, with his own website and is an expert on the diverse array of target species and locations to fish in and around Mackay. Fishing is more than a lifestyle choice for Luke... it's a way of life!

Thursday, 21 September 2017 Getting Hooked in Mackay